Paris, the city of lights, home to a thousand and one monuments, cemeteries, fountains, museums, parks, and cafés. A city that boast two thousand years of history, a who has population that eats more bread than cake and who crisscross the town from morning to night in the most fascinating spectacle of all—Le Métro. 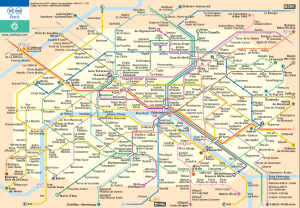 While visiting Paris, my most preferred moments of sightseeing took place underground. As a tourist I can stomach 3 days (max) of lines and tour groups, of paying ridiculous prices at mediocre restaurants, and posing for that forced awkward picture in front of that historical monument…just in case someone doesn’t believe that I was there. For three days it’s cool, necessary even. But after 3 days, I want to dig a little deeper; I want to get under the skin of the city. I want to know what the people who live there do. I want the underground scoop.

Where do you go for the underground scoop? Well, that’s not always the easiest to find. Lucky for me, my gal pal happens to be a Parisian implant and has got a good handle on the scoop. So that was cool. But if you don’t happen to have a friend with an “in,” I highly recommend you take the metro. Not only will it bring you to places your feet couldn’t imagine walking, but also you will have a brief (yet complete) cultural immersion like none other.

Why do I like the metro so much? Here are some of my observations:

One doesn’t have to live in Paris to discover the joys of the underground. The next time you ride a metro, whether your in Paris or New York or London or Tokyo or wherever, take some time to look around you and see the extraordinary mixture of people riding with you, and appreciate that for a short moment in time you are all headed in the same direction.

One thought on “Le Métro”